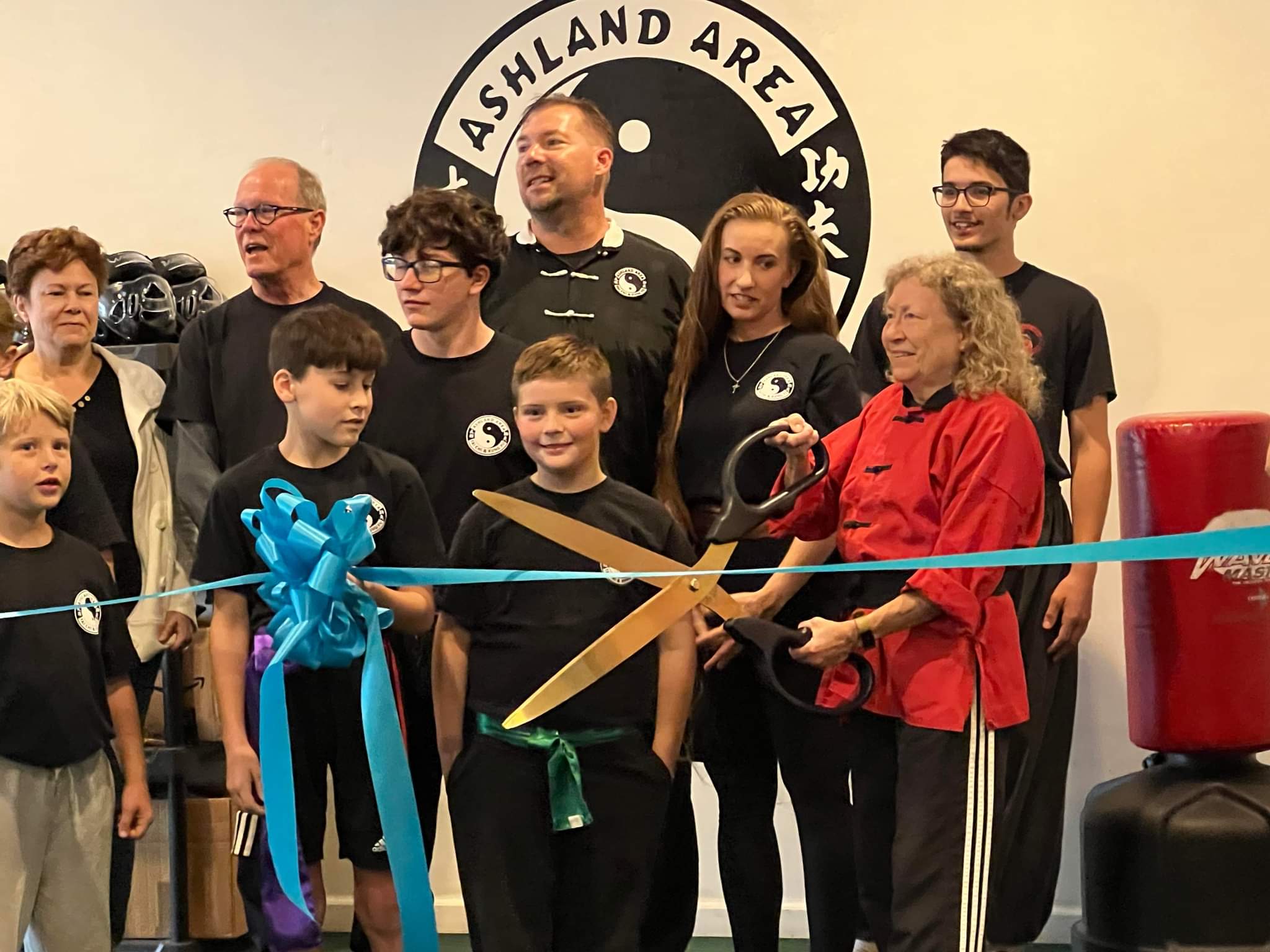 Tai Chi and Kungfu find a Home in Catlettsburg

Let me introduce you to Nancy Compton. She is the Master Instructor at Ashland Area Tai Chi and Kung Fu. She was born in Ashland Kentucky in October 1954 as Nancy Coleman. She graduated from Blazer HS in 1973 and from UK in 1978 with a BS in Nursing. "After graduation from college, I stayed in Lexington KY, married, and began raising a family. In 1985, when my firstborn son was five, I began looking for a martial arts school to enroll him in.

We both had become fascinated with the martial arts that we saw being performed by stars such as Bruce Lee, Chuck Norris, Jackie Chan, and others. After a short and uninspired try at a karate class there in Lexington, I was forced to look further and found a Chinese martial arts school called Four Seasons on Southland Dr. It had been founded by an immigrant from China, Dr. Winglock Ng (also known as John Ng) about 10 years prior. When we walked into their school and saw what they were practicing there (Kung fu and Wushu) we were enthralled and had the feeling that we had found our new martial arts home, Compton explained.

Time passed and Comptons' son was excelling, "My son flourished in his new Kung fu classes, and after watching him for a few months I said to myself, “This is not a spectator sport…I need to be doing this, too!” And so I started training as well.  I was 30 years old and had two small children at that time. Shortly after we started training at Four Seasons, Dr. Ng’s top instructor, John Dufresne, started his school called International Kung Fu and Wushu Academy. We followed him there and trained there until the late 1990s. During that time both my son and I achieved Master's level status (second black sash). In the year 2000, due to a divorce and other life changes, I returned to Ashland and continued Compton.

Compton returned to Ashland, "After getting settled back in Ashland, I wanted to start practicing Kung fu again, but I could not find anyone within an hour or so radius that had a good school. So I began traveling back and forth to Lexington once or twice a month and training with my Lexington martial arts peers. I did this for several years and then started a Tai Chi class in April 2006. I added the Kung fu classes in January 2008. I was teaching out of the fellowship hall in my church at that time. I also trained with Grandmaster Rusty Gray from Nashville for several years. In 2014, we moved to 120 17th Street in Ashland and that’s where we’ve been located until the end of this August when we moved to Catlettsburg. We started our classes there in September, said, Compton.

Recently, the school needed to relocate to a new building, Compton shares, "The reason for our relocation was because there were ongoing issues with the integrity of the building, so our landlord there (Paul Castle) decided it best not to renew our lease. At that time (July) he released us from the lease agreement and we began our search for a new location.  My sister (Christy Reaves) suggested looking in Catlettsburg, so I contacted Rex Castle who is a retired police officer and former student of mine, and a current commissioner for the city of Catlettsburg, to try to assist me in finding a place there.  He informed us that there was a vacancy just across the street from city hall, located at 2614 Louisa St. We met with the owner, Greg McCaine, and within a couple of days made an agreeable lease arrangement."

Compton explained how the school has changed post-pandemic, "Before the Covid pandemic, we had 40-50 students.  We have never been to a very big school because our style of martial arts is not widely practiced in this area. However, the pandemic has taken its toll on us, as it has on so many others. At the time of our move, we had about 20 active students.  Since the beginning of our classes in Catlettsburg in September we have enrolled about 10 more students, so current enrollment stands at about 30.  The new location is great because we are right in the middle of downtown Catlettsburg and have great visibility. The layout of the new school is much better for the practice of our martial arts, and our new landlord (Greg McCaine) has been very accommodating to us. He has worked very hard to get the place ready for us, both inside and out."

If you were wondering what the school offers, Compton has the answers for you, "Currently, we offer classes in Tai Chi and Kung fu, including San Shou, for kids and adults. Our current classes are held on Tuesdays and Thursdays from 5:00 to 8:00 p.m., and we have Saturday classes from 11:00-2:00 p.m.  We are planning on offering more classes on Monday and extending our Saturday hours, to include possible classes in Wing Chun and Qigong."

Earlier this month their school had a grand opening and ribbon cutting, "The grand opening and ribbon cutting ceremony, which took place on October 1st, with the Ashland Alliance and Catlettsburg mayor Faith Day, went extremely well with about 75 in attendance. After the ribbon-cutting ceremony, we performed Tai Chi and Kung fu demonstrations, along with a traditional Chinese lion dance, which is believed to bring good luck to a new school or business. Hopefully, our arrival in Catlettsburg will herald the arrival of more and much needed new businesses there and we may be invited to come to perform for their grand openings. We are planning to do one at our school on Dec 3rd to bring luck to all who see it for the holiday season."

Compton is elated to share, "We are loving and are flourishing at our new location in Catlettsburg and plan on being there for a long time to come. When I first started school back in April 2006, it was just me. I was a single mom working full time for the VA, but I ended up having to teach Tai Chi and Kung fu three evenings a week and on Saturdays. I have brought eight students to the black sash level, three to second black, and two to instructor status. Those two are Gus Burcham, who started like me, a single parent training on the side because of his love for Kung Fu, and is now my head instructor. Also, Jude Garner, who started with me at about 9 years old and is now teaching my kid's beginner to intermediate classes.  I also have several students that are “teacher assistants”, because I train them early on how to teach and to help others learn.  This is what the joy of teaching is all about!"

If you are not familiar with the practices of Tai chi or Kung Fu, Compton gives us. break down, "Training in Tai Chi and Kung fu is a wonderful and fulfilling way to develop a healthy mind and body, it is something that can become a healthy way of life for people of any age. Tai Chi is a very relaxing and healing activity.  Research has shown that it is beneficial in the treatment of numerous conditions and so it has been recommended by the Harvard Medical Center and the Mayo Clinic for the alleviation of such ailments as arthritis, back/joint pain, fibromyalgia, stress-related conditions, high blood pressure, and even diabetes.  Both Tai Chi and Kung fu help to develop mind/body coordination, and alsohelps improve balance, reflexes, focus, self-discipline, and self-confidence. Learning self-defense is crucial for students, to avoid being harmed during a possible attack. We accommodate people of varying ages and mental capacities. I have taught kids from the ages of 3 to 90, some autistic, some with Down’s syndrome, dementia or otherwise mentally challenged."

Compton loves being a teacher and it shows in her work and her student's performances. "Teaching Chinese martial arts has been an extremely rewarding avocation. It has been very rewarding to help people to develop abilities and confidence in themselves that they didn’t believe were possible. In our school, training is modified as needed to help everyone to progress and benefit physically and mentally. My students are encouraged early on not to say “I can’t do this or that”. They are taught to say “I am trying/working hard”. The literal translation of Kung fu is “hard work and patience”; the literal translation of Wushu is “martial arts”.  This is why Kung Fu Is the grandfather of most martial arts, such as Taekwondo, karate, aikido, Krav Maga, jujitsu, Muay Tai, kickboxing, and many forms of MMA.  They are all part of the evolution of the Chinese martial arts of Kung Fu," exclaimed Compton

If you are interested in attending or bringing your child to attend a class, please contact Nancy Compton at 606.465.0317. If anyone would like to help with their relocation expenses you can donate to gofundme on Facebook under Kungfu School Relocation organized by Nancy Compton.