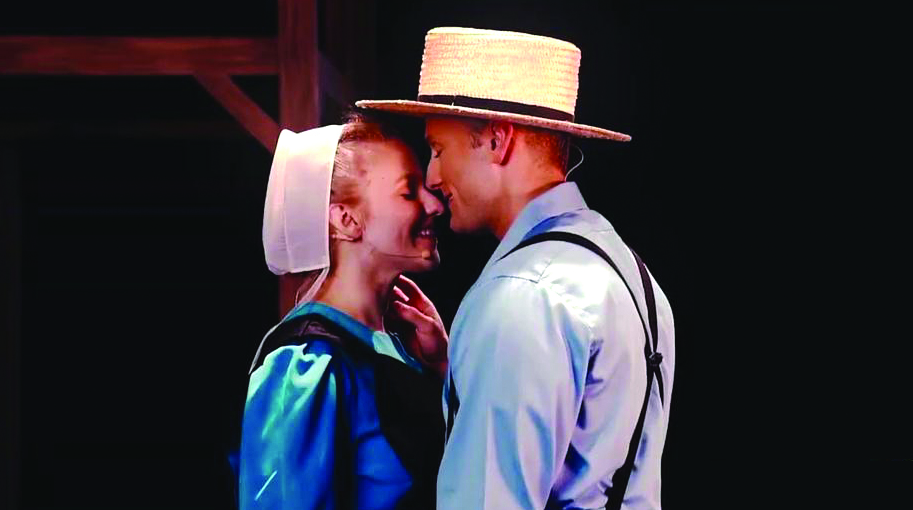 It’s not often that a young woman from a small town in Appalachia becomes a successful actor, but that’s exactly the life Russell native Caroline Clay is living.

Clay, who has made a living as a musical theater actor since graduating from Morehead in 2015, stars in the feature film The Confession, which will be released in theaters February 20. She plays the lead role of Katie Lapp.

“The synopsis is a story of a girl from Amish country who finds out she is adopted,” Clay explained. “She leaves the Amish community to go into the English community (that’s what the Amish call non-Amish) in search of her birth mom. The film has a little of everything – tears, fun – it’s a feel-good family movie. It has tear-jerk moments, but it has a happy ending.”

“I auditioned for the part – I’d worked with the producers in plays and live theater in the past,” Clay said. “I sent in my audition and ended up getting the part. We really shot the film in Amish country in Indiana. It was filmed live on stage, so the performance is very theatrical.”

Clay graduated from Russell High School in 2011, then went on to Morehead with a double major in theater and communications. “I was always involved in the theatrical scene – I was in plays and musicals at ACC (before it was ACTC), and at the Paramount. And my professors did a good job in preparing me for the real world of acting.”

The Confession, produced by Blue Gate Musicals, will play at the Huntington Mall, and she is hoping it will play at Ashland Movies 10, a Cinemark theater, but there is no confirmation yet. Her co-stars in the performance include John Schneider of Dukes of Hazard fame, and Christian comedian Shonda Pierce. “They were lovely to work with,” she said. “It was amazing having such seasoned veterans acting along-side me.”

“If you go see The Confession, I want you to remember how many people put so much work into it,” she said. “There’s lighting, set design, sound, costume design, the people who wrote the music – when you think about all that goes into it, it gives you a greater appreciation of the art form.”

Clay said she has made a steady living working as an actress since graduating from Morehead in 2015. “I’ve worked all over the country, in performances in 42 or 43 states,” she said. “But this is the first thing that’s been in theaters nationwide.” She also noted, “A good attitude leads to work, and work leads to more work.”

What’s Clay’s advice to young people who might be considering acting as a career? “Read! Read more plays and more books – it helps you understand characters, vocabulary, makes you more empathetic. I credit reading as helping me grow and succeed in this profession,” she said. Her mother Robin has been the librarian at Russell High School for many years.

Clay also encouraged young people to pursue acting. “Have confidence. Don’t let people tell you that you can’t make money at it. I’ve made a living at it for 10 years.” Her sister Hayley, also a Russell and Morehead graduate, is also involved in the arts and will be going to Egypt this week to perform.

“I have only been able to get where I am now through the support of my parents, Robin and Tom Clay. My dad took me to auditions, and my mom was always taking me to practices.  That all involves time. They really are the reason I got where I am now.”