A Special Bicycle for a Special Student

A Special Bicycle for a Special Student 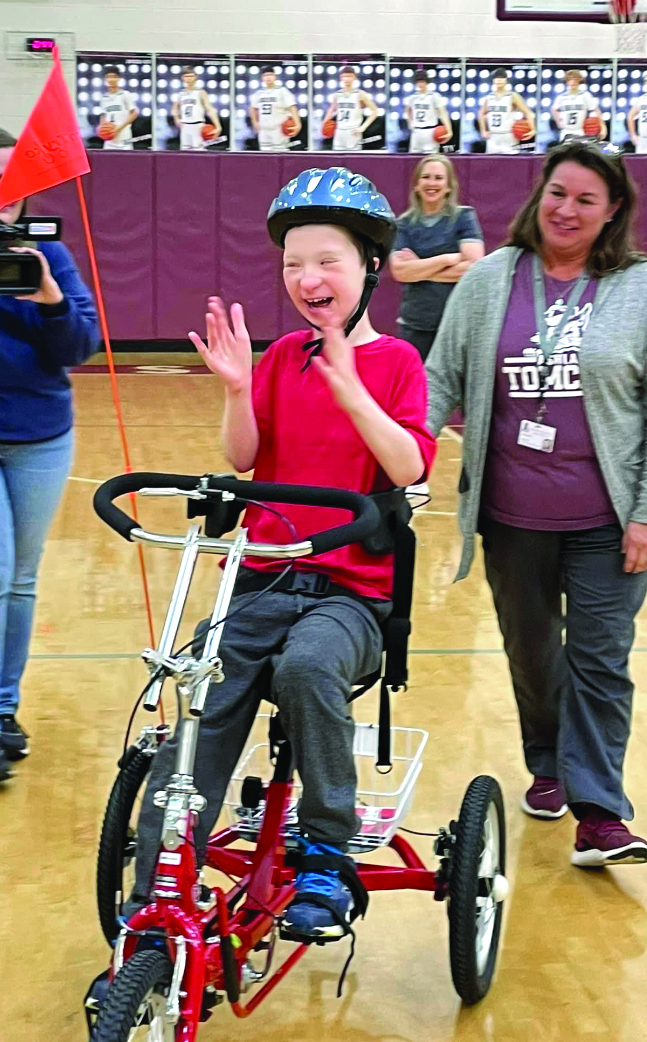 Learning to ride a bike is something that most children take for granted. Some take longer than others to learn, but almost all of them at least get the chance to try. For Spencer Nichols, riding a bicycle with his brother and sister was something that he could only wish for. That is, until the Ashland Kiwanis stepped in.

Spencer Nichols, a seventh-grader at Ashland Middle School, was born with Say Barber Biesecker Young-Simpson Syndrome. The syndrome has several different characteristics for diagnosis. These can include limited facial movement (also known as a mask-like face), small eyes with droopy eyelids, heart conditions, hypothyroidism, low muscle tone, and a moderate to severe learning disability. Only 200-400 in the world have Say Barber Biesecker Young-Simpson Syndrome. His mother, Rachel Nichols, said that “when he was born, if he lived at all, we were given a list of things that he wouldn’t be able to do, including walk.” Spencer proved the experts wrong by taking his “first independent steps at age four, and he hasn’t stopped since,” said Nichols.

Last Thursday, the Ashland Kiwanis came to Ashland Middle School and presented Spencer with a brand new tricycle that was made especially for him. Spencer may be nonverbal but there were no words needed for him to express the amount of joy he felt at taking that very first ride. The happiness was written all over his face.

Nichols said that “we have always strived to treat Spencer like any other kid. We have never told him that he couldn’t do anything that his siblings could do.” The family has been able to “adapt a lot of things meant for kids without disabilities” to work for Spencer because something with a “special needs label is instantly more expensive.” However, safely adapting a regular bicycle for Spencer was something that they were unable to do. “It is the one thing that he has never been able to do with his siblings.” Buying a “special needs” bike was also out of the question for the family. The bicycle alone costs thousands of dollars. Then they would have had to order additional modifications to make the bike work for Spencer and each of those modifications “cost hundreds of dollars.”

Spencer’s new tricycle has all the bells and whistles needed to keep him safe. Other than the stability of three wheels, the typical handlebar has been replaced with one in circular form to make it easy for Spencer to hold onto. There are “arms” on the side of a seat that is more like a chair that includes a seatbelt to keep him safely in place. There are straps to help keep his feet on the pedals and a basket on the back of the tricycle where he can stow things that are important to him. The Ashland Kiwanis also included a helmet.

This new tricycle also makes an activity that he used to watch attainable for him. Nichols said that now Spencer can “ride bikes with his siblings as a family. It means his life is a little more neurotypical.” The family is leaving the bicycle at school for now “so all of Spencer’s friends can enjoy it too.” But during the summer break, Spencer will be riding his bike just like all of the other kids.