Boyd County Based Four Skulls at PAC This Weekend

Boyd County Based Four Skulls at PAC This Weekend 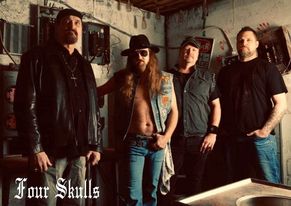 Four Skulls, a successful hard rock band based in Boyd County, will be returning to the Paramount Arts Center Saturday, January 21, opening the show for FireHouse and Lita Ford.

“We’ve been together about 10 years, playing our original music,” said band member Mick Bryan. “We have one album out, World of Hurt. It’s a concept album about a guy who went to war.” Bryan said the band is working on a new album and will play something from that one at the show on Saturday. “Duane (Crisp) and I went to school together, and played in and out of cover bands,” before forming Four Skulls.

Band members include guitarist Bryan, singer Aaron Miller, bassist Duane Crisp, and Mike Staton on drums. Bryan described the group as a regionally touring band, performing in Nashville, Cincinnati, Columbus and Akron. They have opened for a number of national acts such as Saving Abel, Bullet Boys, Puddle of Mud, Queensryche, Jeff Tate, Sponge, and Enough is Enough. They’ve also opened for Firehouse before.

“We once played a two-day festival in Maine,” Bryan noted. “A couple of DJs were playing our music, and they ended up inviting us to come up. So, we got together and took off.”

Bryan said he built a studio at his house, and the band started recording. He said the World of Hurt Album has attracted veterans to their music. “A lot of people who come to see us are veterans who have been through warfare. They tell us they love the music.”

“We’ve played on the national indie radio scene. We’ve played everywhere – Australia, Venezuela, Germany,” Bryan commented. “Everything is released on the popular streaming sites, including Spotify, Apple Music, and others.”

Bryan said they played with the Motley Crue Tribute show at the Paramount before Covid, and he played the role of Slash in a Guns ‘n’ Roses tribute. He explained that band got this gig when the promoter for the Lita Ford show was looking for a local band as a opener and contacted the Paramount. “And the Paramount contacted us.”

The band’s website, fourskulls.net, states the band’s music as “their love of lush vocal arrangements, heavy rock, and time signature changes are somewhat indicative of their style. The band prides themselves on bringing everything they have to deliver a powerful show with a driving rhythm section, soaring guitar work, and over-the-top vocals.”